Japan’s Meteorological Agency (JMA) has warned people to stay clear of Mount Aso, on the southern island of Kyushu, after it propelled columns of gas and ash miles into the sky. There are no reports of injuries thus far.

Mount Aso – the country’s most active volcano – erupted at around 11:48 am on Wednesday. Located in an area popular with hikers, it sent out dramatic ash plumes 3.5 km (2.2 miles) high. 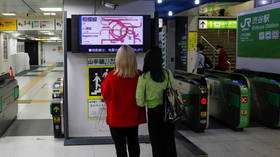 The meteorological agency set the alert level for those in the vicinity of the 1,592-metre (5,222ft) volcano to three out of five on its danger scale. Owing to the risk of large falling rocks and pyroclastic flows within 1km (0.6 miles) of the vast Nakadake crater, people were told not to approach the area.

“Human lives are our priority, and we are working with the Self Defense Forces, police, and firefighters to effectively deal with the situation,” Chief Cabinet Secretary Hirokazu Matsuno told reporters.

JMA representative Tomoaki Ozaki told a televised press conference that toxic gas may also be emitting from the volcano.

CCTV footage from the nearby Aso Volcano Museum and its car park captured the moment the smoldering crater erupted. People can be seen rushing to their cars and driving away at speed from the dark cloud of ash encroaching on the location.

Local police said there were no reports so far of casualties or missing individuals. They noted that 16 hikers who had been on the mountainside earlier that day had returned safely.

Japan is home to more than 100 volcanoes, and seismic activity in the region is high. Last Thursday, a half-mile exclusion zone had been established around Mount Aso after a minor eruption.