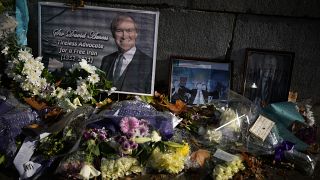 British police announced on Thursday that they have charged a 25-year-old man with the murder of lawmaker Sir David Amess and preparation of terrorist acts.

Ali Harbi Ali was arrested shortly after the attack on the Conservative MP last Friday as Amess was meeting constituents in the Essex town of Leigh-on-Sea.

Ali remains in custody and is to appear at the Westminster Magistrates' Court later on Thursday.

Amess, 69, was stabbed multiple times and died at the scene.

An MP for 40 years, he was described by Prime Minister Boris Johnson as "one of the kindest, nicest, most gentle" people in British politics. His colleagues paid tribute to his character and career in a special session of Parliament on Monday.

Essex Police had said after the attack that they believed Ali had acted alone and the probe was handed over to the Metropolitan Police's Specialist Counter Terror Command over suspicion Ali may have had a "motivation linked to Islamist extremism."

Matt Jukes, Assistant Commissioner for Specialists Operations, said in a statement on Thursday that "today's charge is a significant milestone in the case, but the work from my colleagues in the Met's Counter Terrorism Command will continue apace."

"There has been considerable speculation in the media about the background, history and motivation of the man charged.

"I understand the huge level of public interest in this case, but now a charge has been brought, it is vitally important that everyone exercises restraint when commenting on it publicly, to ensure future court proceedings are not prejudiced in any way," he added.

The killing, which came five years after MP Jo Cox was murdered by a far-right extremist, has raised questions about lawmakers' safety. Home Secretary Priti Patel has asked each police force to review the security arrangements for all MPs.

Patel added in a statement on Wednesday that the Joint Terrorism Analysis Centre had found following its own review that there is no "information or intelligence which points to any credible, specific or imminent threat" but that the threat level facing lawmakers "is now deemed to be substantial."